New York City is set to get pounded with up to a foot of snow as the city’s first wintry blast of the season rolls in Wednesday evening — with forecasters predicting an “ugly mess” across the region.

Six to 12 inches of snow is still in the cards for the city, with the more severe prediction more likely, Accuweather senior meteorologist Matt Rinde said Wednesday morning.

Substantial snowfall is expected to begin around 4 p.m.

“Some things would have to go very wrong” if the city doesn’t see at least 6 inches, the meteorologist said.

Even then, Rinde said the Big Apple will likely get “get 3 inches of sleet.”

“So either way, it’s going to be an ugly mess,” he told The Post.

Meanwhile, regions northwest of the city could see more than a foot, while parts of Long Island could get more of a wintry mix — with 3 to 6 inches predicted around the Hamptons, and only an inch or two farther out, according to Rinde.

Conditions will start looking treacherous for commuters at the very beginning of the storm, which is set to roll in around 4 or 5 p.m., according to Rinde.

“Late this evening, if you’re out for any reason, I think that’s where really big problems are going to occur,” he said.

“It’s not going to be great in the evening rush from 5 to 7 … any amount of wet roads or snowy roads slows things down considerably.”

As the snow starts, temps will sit around 33 — the high for the day, according to Rinde. But the mercury will drop to 30 or 29 as the storm gets underway, and is forecast to dip as low as 27 overnight.

However, windchill will make it feel much more frigid.

“We’re going to see sustained winds between 20 and 30 mph at the peak of the storm and that is going to drop the real-feel temperatures into the single digits at times as we head into the night,” Rinde said. 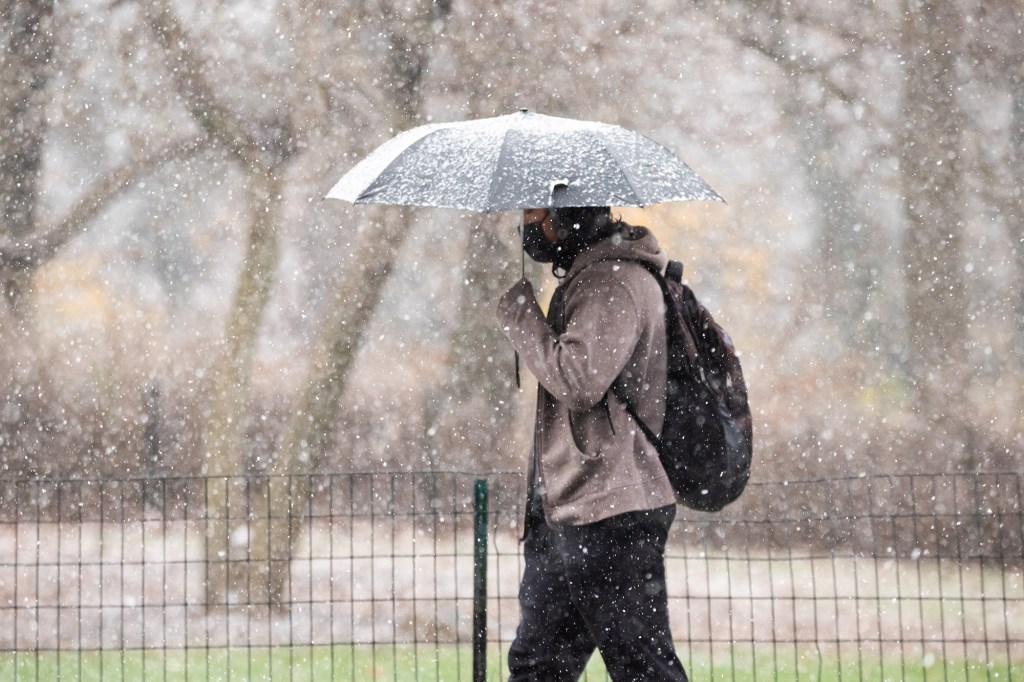 A person walks with an umbrella in Central Park during the first snow of the season on Dec. 9, 2020, in New York 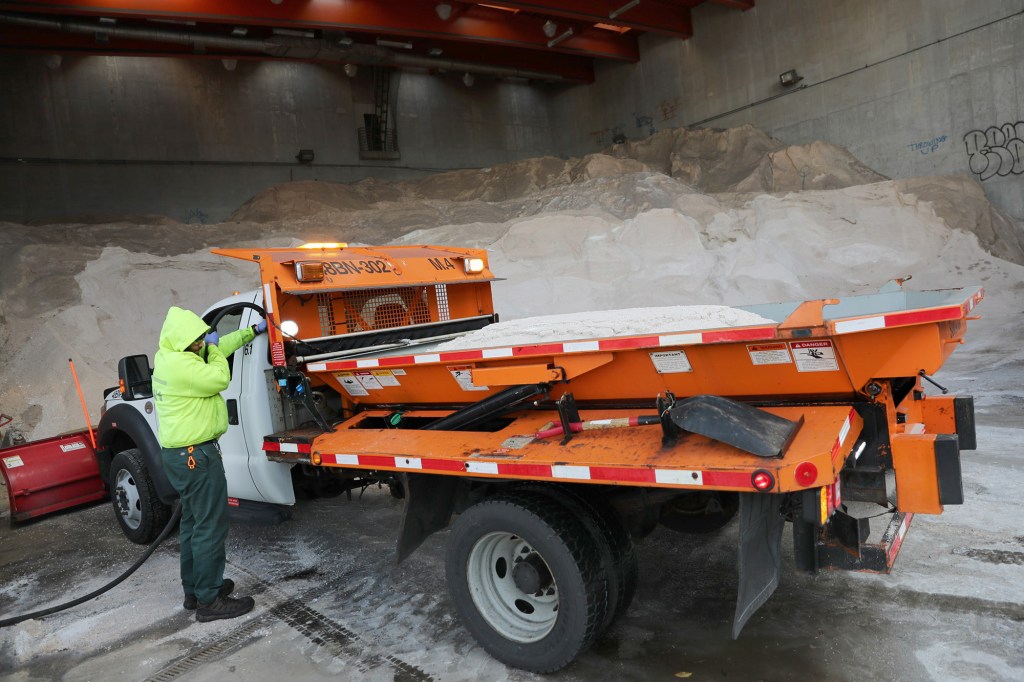 An NYC sanitation worker prepares a large sander truck at a sanitation station at 12th Avenue and the West Side Highway in Manhattan for the upcoming snowstorm. 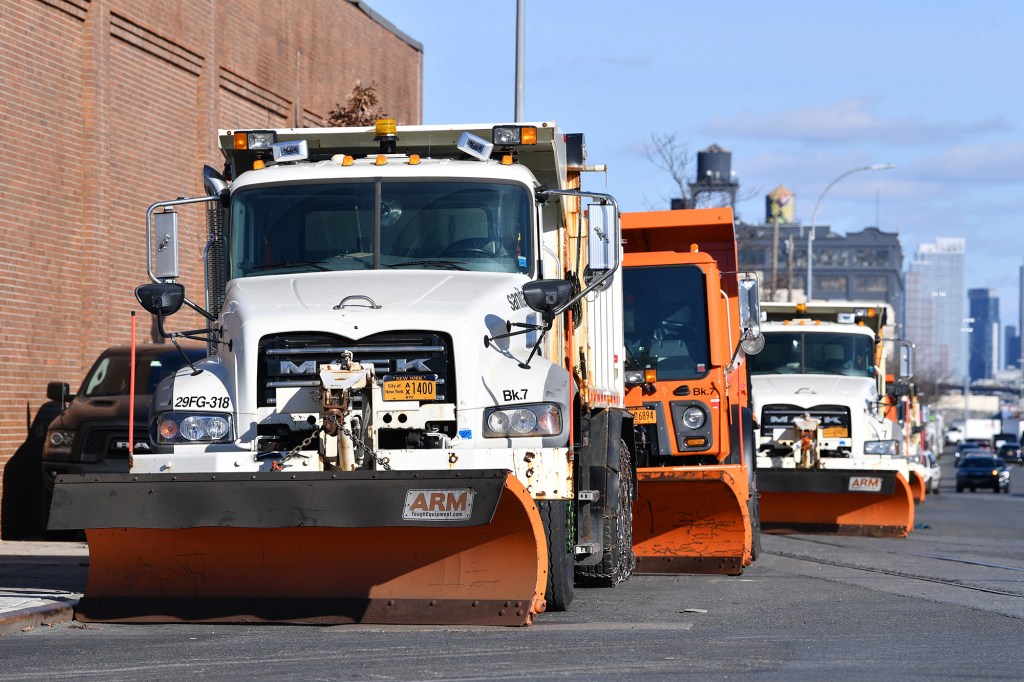 A former Houston police captain allegedly ran a man off…


Some wind gusts will even be as strong as 40 to 50 mph — even packing a 55-mph punch on coastal Long Island, he said.

Temperatures will only hit 31 degrees Thursday.

Though the storm won’t meet the official definition of a blizzard, “there will be something described as blizzard conditions — when you have very strong winds with very heavy snowfall,” Rinde said.

The storm could also cause significant flooding, according to the meteorologist.

“Coastal flooding is going to be a problem, with the orientation of the high pressure to the north,” the meteoroligst said.

“And where the storm is coming in, it’s going to create a strong easterly wind as over a long fetch of water, and that’s going to cause problems specifically at high tide in the areas that are prone to coastal flooding.”

The area will also be at risk of power outages during the storm, he said.

“I think with the nature of the snow being fairly heavy and wet and mixing with sleet, and with the wind, we’re forecasting some pretty decent power outages mostly to the north of the city,” he said.

All things considered, the storm prediction isn’t particularly unusual for this time of year, according to the forecaster.

“If you’re going to see a storm of this nature, this is pretty much the time of year you’d expect it,” he said. “We’re in the three coldest months of the year typically.”

Workers from the city Department of Transportation were out in the Times Square area Wednesday morning, using yellow carts to spread salt on the roads.

The city Department of Sanitation issued a snow alert[2] that will begin at 2 p.m. Wednesday.

“Salt spreaders are already filled and ready to go,” the department said in a press release earlier this week.

“Additionally, the Department’s collection trucks will be pulled from collection duty and turned into snow plows, ready to plow snow once two inches of snow has fallen. Further, as conditions allow, the Department will use its ‘brine trucks’ to apply liquid salt to some early-to-freeze roads.”

Acquire this Domain
You can acquire this site’s domain name! We have nurtured its online marketing value by systematically curating this site by the domain’s relevant keywords. Explore our content network – you can advertise on each or rent vs. buy the domain. Buy@TLDtraders.com | Skype: TLDtraders | +1 (475) BUY-NAME (289 – 6263). Thousands search by this site’s exact keyword domain name! Most are sent here because search engines often love the keyword. This domain can be your 24/7 lead generator! If you own it, you could capture a large amount of online traffic for your niche. Stop wasting money on ads. Instead, buy this domain to gain a long-term marketing asset. If you can’t afford to buy then you can rent the domain.

About Us
We are Internet Investors, Developers, and Franchisers – operating a content network of several thousand sites while federating 100+ eCommerce and SaaS startups. With our proprietary “inverted incubation” model, we leverage a portfolio of $100M in valued domains to impact online trends, traffic, and transactions. We use robotic process automation, machine learning, and other proprietary approaches to power our content network. Contact us to learn how we can help you with your online marketing and/or site maintenance.

Your browser sent a request that this server could not understand.
Size of a request header field exceeds server limit.

Your browser sent a request that this server could not understand.
Size of a request header field exceeds server limit.

This website uses cookies to improve your experience while you navigate through the website. Out of these cookies, the cookies that are categorized as necessary are stored on your browser as they are essential for the working of basic functionalities of the website. We also use third-party cookies that help us analyze and understand how you use this website. These cookies will be stored in your browser only with your consent. You also have the option to opt-out of these cookies. But opting out of some of these cookies may have an effect on your browsing experience.
Necessary Always Enabled
Necessary cookies are absolutely essential for the website to function properly. This category only includes cookies that ensures basic functionalities and security features of the website. These cookies do not store any personal information.
Non-necessary
Any cookies that may not be particularly necessary for the website to function and is used specifically to collect user personal data via analytics, ads, other embedded contents are termed as non-necessary cookies. It is mandatory to procure user consent prior to running these cookies on your website.
SAVE & ACCEPT
Generated by Feedzy